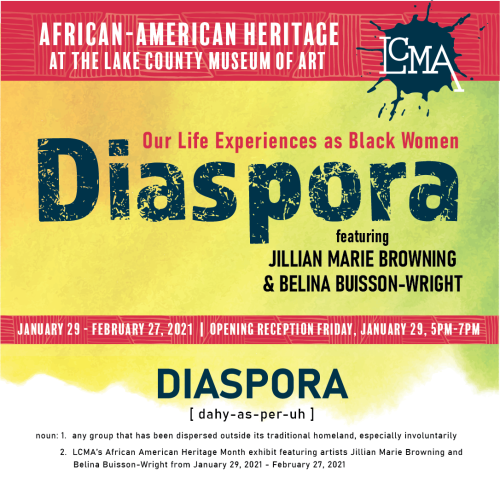 Join the Lake County Museum of Art as we present Diaspora: Our Life Experiences as Black Women.

Featuring artists Jillian Marie Browning and Belinda Buisson-Wright, we invite you to celebrate African American Heritage Month with an opening reception on January 29th at 5pm. The exhibit will run from January 29th-February 27th.

Jillian Marie Browning is an interdisciplinary artist pursuing themes of feminism, identity, and the contemporary black experience. Born in Ocala, Florida they received a Bachelor of Science degree in Photography from the University of Central Florida in 2012 and a Master of Fine Arts degree in Studio Art from Florida State University in 2015. They have had their work shown nationally as well as been included in the permanent collection of the Center for Photography at Woodstock and the University of Maryland’s David C. Driskell Center For The Study of Visual Arts and Culture Of African Americans and the African Diaspora. They currently work for The School of Art and Art History at the University of Florida.

Belina Buisson-Wright is a native Floridian of Haitian American descent. Wright went to college to become a teacher and taught for 8 years until she began to home school her children. During her years of classroom instruction, she began experimenting with acrylic paints. Wright is a self-taught artist that believes her ability to paint is a God given gift. She is fascinated by the music, art, clothing and customs of various cultures. Her art is strongly influenced by her Haitian and African-American heritage. She tries to capture its vibrancy in her work. She enjoys painting people in their element - from the extreme to the simple and mundane - whether it’s laughing, dancing, singing or working. Her Haitian influenced pieces usually depict tall, stylized women holding baskets and most recently, women dancing. Wright believes there is a grace, strength and beauty in these women. She has participated in various traditional and online exhibitions nationally and internationally. She resides in Central Florida with her husband, Stephen and their four children. 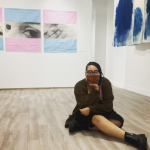